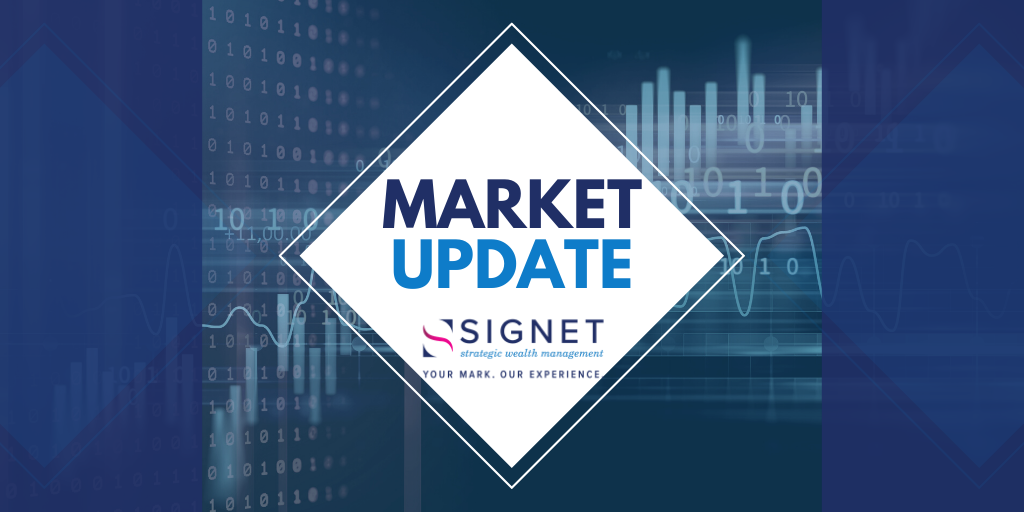 The Second Year of the Bull Market Begins

The bear market ended one year ago this week, finishing one of the fastest and most vicious bear markets of all-time—one that led to a drawdown of 34%. Things have come full circle now, as stocks have staged a furious rally, with new highs happening across the globe as the economy recovers at a record pace. We take a look back at what happened last March, while also examining how previous bull markets did during the second year of their existence.

A LOOK BACK
Although we aren’t sure we want to, let’s take a look back at the bear market and try to put in perspective just how historic and devastating it was for investors, while also pointing out some incredible positives. Here are five amazing stats to summarize the bear market and bounce back:

• The most volatile month ever. Huge swings (both up and down) were quite common in March 2020. In fact, looking at the Dow, the average daily move (up or down) during March 2020 was an astounding 5.3% per day. The previous record was 3.9% during November 1929, again showing just how March 2020 was like nothing we’ve ever seen before.

• The bounce back was even more impressive. After falling nearly 34%, it took only five months for the S&P 500 to recover its losses, the fastest bounce back ever for a 30% loss or greater. To put it in perspective, the S&P 500 also lost 34% in 1987, but that recovery took 20 months to get back to new highs.

NOW WHAT? THE BULL TURNS TWO
Incredibly, the S&P 500 has increased more than 74.9% since the lows a year ago (as of March 19, 2021), making it the best start to a bull market ever. After such a strong first year, where might this bull market go in its second year?

Figure 1 shows what happened during the first year and second year of bull markets that followed 30% or larger bear markets going back to World War II. Here are three takeaways to remember as the bull turns the calendar to year two.

• Since World War II, there have been six other bear-market declines of at least 30%, and in every single case the S&P 500 was up firmly the first year of a new bull market—with an average return of more than 40%. The good news is the gains continued in year two, as stocks were also up the second year of a new bull market every single time—up a solid 16.9% on average. Only once (after the 1987 crash) did stocks gain more during year two than year one.

• Pullbacks tend to happen during the second year of a new bull market, with an average year two pullback of 10.2%. Considering the current bull market reflected the best start to a bull market ever, this could open the door for an above-average pullback during year two 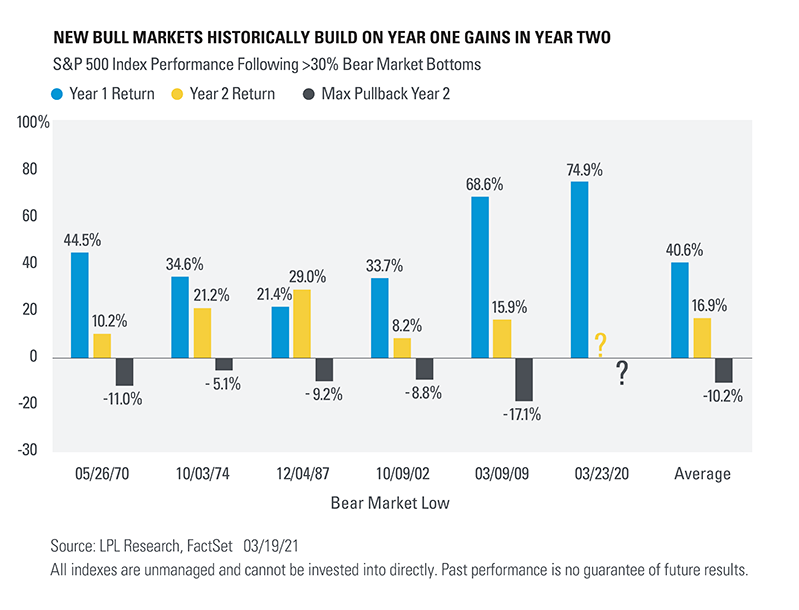 REITERATE OUR BULLISH VIEW
This bull market is off to an amazing start, but it is important to remember it is still young. While a pickup in volatility would be normal as this stage of a strong bull market, we think suitable investors may want to consider buying the dip. Vaccine distribution, fiscal and monetary stimulus, and a robust economic recovery all have our confidence high.

COVID-19 still presents lingering near-term risk, with variants of the virus adding to the worry. Additional sharp and swift moves higher in interest rates could potentially cause valuations to contract meaningfully, though we see that as unlikely.

We continue to expect higher interest rates to fade as a concern for the bull market, but it may take a bit more time to reach that point. We continue to recommend an overweight-to-equities and underweight-to-fixed-income stance relative to investors’ targets, as appropriate. We reiterate our S&P 500 Index fair value target range of 4,050–4,100 at year-end 2021, based on a price-to-earnings (PE) multiple near 21, and our 2022 earnings forecast of $195.

This material is for general information only and is not intended to provide specific advice or recommendations for any individual. There is no assurance that the views or strategies discussed are suitable for all investors or will yield positive outcomes. Investing involves risks including possible loss of principal. Any economic forecasts set forth may not develop as predicted and are subject to change.

References to markets, asset classes, and sectors are generally regarding the corresponding market index. Indexes are unmanaged statistical composites and cannot be invested into directly. Index performance is not indicative of the performance of any investment and do not reflect fees, expenses, or sales charges. All performance referenced is historical and is no guarantee of future results.

Any company names noted herein are for educational purposes only and not an indication of trading intent or a solicitation of their products or services. LPL Financial doesn’t provide research on individual equities.

All information is believed to be from reliable sources; however, LPL Financial makes no representation as to its completeness or accuracy.

The Standard & Poor’s 500 Index (S&P500) is a capitalization-weighted index of 500 stocks designed to measure performance of the broad domestic economy through changes in the aggregate market value of 500 stocks representing all major industries.

The PE ratio (price-to-earnings ratio) is a measure of the price paid for a share relative to the annual net income or profit earned by the firm per share. It is a financial ratio used for valuation: a higher PE ratio means that investors are paying more for each unit of net income, so the stock is more expensive compared to one with lower PE ratio.

Earnings per share (EPS) is the portion of a company’s profit allocated to each outstanding share of common stock. EPS serves as an indicator of a company’s profitability. Earnings per share is generally considered to be the single most important variable in determining a share’s price. It is also a major component used to calculate the price-to-earnings valuation ratio.

All index data from FactSet.

This research material has been prepared by LPL Financial LLC.