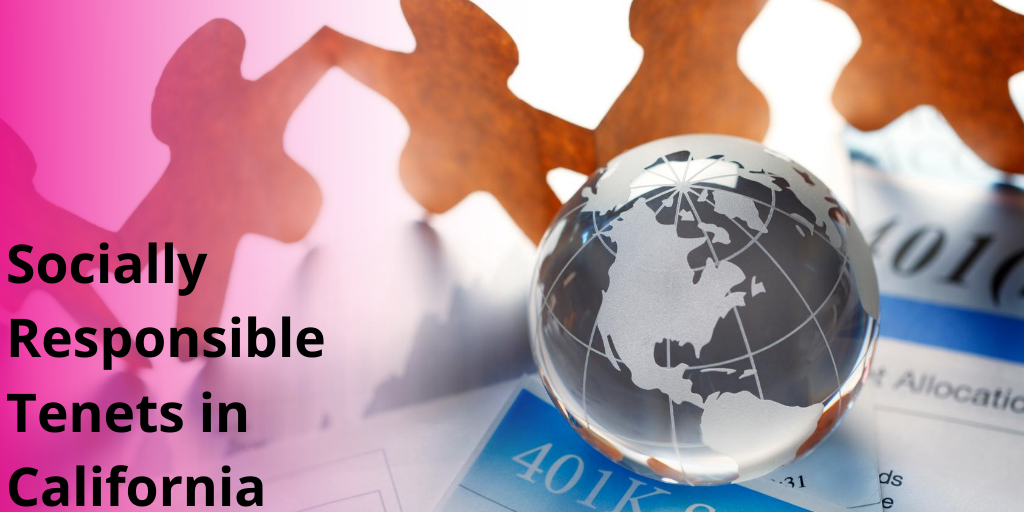 It might come as no surprise that the “Golden State of Mind” is geared more toward sustainable initiatives and socially responsible organizations than other states. In fact, it’s a veritable hotbed.

While many socially responsible organizations focus on positive contributions as part of their business model, some are more surprising sources of responsible behaviors that you might take note of.

Socially responsible businesses make it easy for socially responsible investment (or SRI) to play a role in their strategy. They are typically for-profit ventures that use their success to leverage societal change, either by improving the nature of the industry they’re a part of or having a business model entirely focused on positive impact.

Stakeholders in any business include the community they are a part of, and there is a lot to account for with socially responsible business in California.

So, what makes California such a hotbed of socially responsible organizations? Is it the people? Is it the laws? Or is it just in the water out here?

And what industries are leading the way -- in terms of driving social responsibility in California companies? We’ll dig into that below.

Why California is “So Responsible” … Environmentally

“Responsible” might not be the first thing that comes to mind when you think California. Maybe you’ve got thoughts of carefree cruising down the coast, or catching waves at Venice Beach.

But with such great earthly scenery comes a great responsibility to protect it. And Californians have long been recognized for their devotion to environmental causes.

In fact, the Golden State is home of some of the world’s leading environmental organizations and nonprofits, such as the Sierra Club, who works to protect public lands, promote sustainable energy, mitigate global warming and oppose the use of coal.

With such a wide array of natural attractions to choose from in California, such as the Sierra Nevadas, Coast Ranges, Joshua Tree National Park and more, it’s no wonder its citizens are invested in protecting them. Nearly every county, township or city has some sort of local organization geared toward environmental issues.

Plus, the state is a hotbed of Democratic politics, most of whom include environmental protection and social justice as top issues on their platforms. U.S. Senators Harris and Feinstein both rank highly on their scorecards from the League of Conservation Voters. And members in the California state legislature in Sacramento have even gone so far as to sponsor bills that propose that 100 percent of the retail electricity sold in the state to come from renewable energy sources by the end of 2045.

Why California is “So Responsible” … Socially

Being on the Pacific coast, as well as the Mexican border, California serves as a beacon for international culture, and boasts an immigrant population of almost 11 million – about a quarter of the foreign-born population nationwide, according to the Public Policy Institute of California.

With such a diverse racial melting pot, Californians are uniquely attuned to the cultural sensibilities of others, and tend to embrace an approach that looks out for its fellow man.

Here are some general tenets of the socially-liberal approach California (and its companies) take.

-Paying workers are living wage: San Francisco has a minimum wage of $15.59, for instance.

-Tenants’ rights: Groups such as the Coalition for Economic Survival work to empower tenants, and preserve safe affordable housing.

All of these tend to affect companies based in California, and how they approach their corporate culture.

Move over, Midwest. California is America’s new breadbasket. For California to remain healthy and productive, its companies have to place emphasis on preserving the environment.

As the most populous state in America, you might imagine that California places a premium on mouths to feed. And you’d be correct. There’s more than 39 million of them, and Californians generally believe they deserve fresh foods, produced by socially-responsible companies.

According to the California Department of Food and Agriculture, California's agricultural abundance includes more than 400 commodities, and over a third of the country's vegetables and two-thirds of the country's fruits and nuts are grown in California.

Meats account for around 56% of the carbon footprint of the average American’s diet, with the meat industry accounting for over 14% of greenhouse gas emissions globally. Many companies in California are seeking to curb that impact by providing plant-based alternatives, and have in recent years reduced prices to make the switch more attractive.

We know that the Golden State is rich in natural beauty. But it’s also rich in natural resources. And as a state, California and its companies are leading America in the march toward more renewable energy, and addressing climate change.

According to the U.S. Energy Information Administration, California is second only to Texas in total energy consumption, but has one of the lowest per capita energy consumption levels in the United States. The state’s efforts to increase energy efficiency and develop alternative technologies have slowed growth in energy demand. And according to the California Energy Commission, the state is leading the nation toward a 100 percent clean energy future.

How Signet Can Help

It is our mission to provide investment resources and strategies to clients and financial institutions helping them develop a greater knowledge and passion for sustainable, responsible and impact investments. Let us help you find your mark with our experience.

The return of Environmental, social, and governance investing may be lower than if the adviser made decisions based solely on investment considerations.

No strategy assures success or protects against loss.