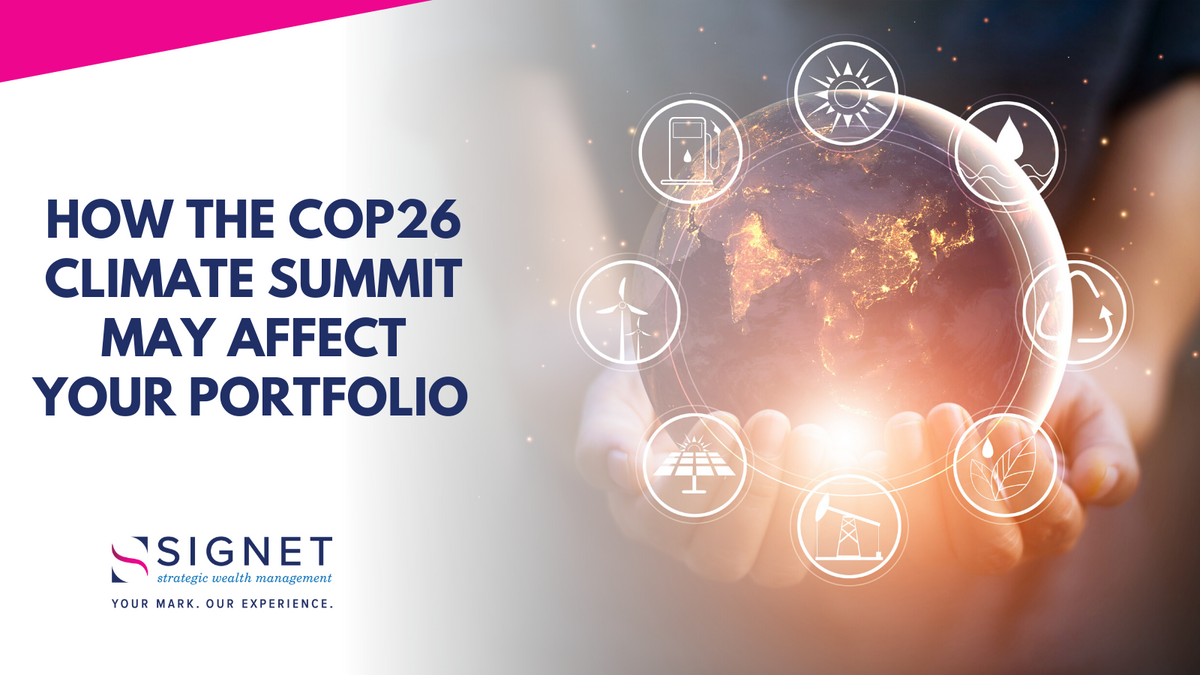 How The COP26 Climate Summit May Affect Your Portfolio

If we want action on climate change, we should probably start planning how that happens. At least, that was the thinking behind the United Nations’ climate summit, which was also known as COP26.

Now, did world leaders emerge with a broad-stroke-type plan or a universal mandate, or even anything actionable? That’s still up for debate.

What we do know is that the topics that were discussed at the conference will have ramifications on the corporate world, as nations around the world will work to drastically reduce CO2 emissions in the next 10-30 years.

This, of course, will affect broader capital markets, drive decades-long trends, and re-shape corporate strategy. Put simply? This will affect all investors (and humans) – and your portfolio.

So, strap in and have a quick read. We’ll discuss more about what happened at COP26 and what you might do to position yourself for this coming sea change.

Officially speaking, the COP26 was the 26th UN Climate Change Conference, and it was held at the Scottish Event Campus (SEC) in Glasgow.

Billed with the (only-slightly-ominous) tagline “the last, best hope to save the planet” before the event, COP26 brought together diplomats, global politicos and corporate titans to discuss strategies and help solve what is unilaterally considered the biggest, most important challenge of our time (with apologies to COVID).

While pundits and other experts have noted that not much in the way of actual progress was made, at the very least there was a consensus that governments will return next year with stronger, more well-defined plans. In fact, over 200 delegates struck a major agreement, which is aimed at strengthening efforts to fight climate change.

Key points from this agreement? Most wealthy nations are expected to not only double their funding by 2025 on climate-change prevention, but also also accelerate climate action to keep alive the goal of limiting global temperature rise to 1.5 degrees.

Antonio Guterres, secretary-general of the United Nations, led  his remarks by saying that it’s “time to go into emergency mode,” which means gaining consensus and securing promises on:

-Putting a price on carbon

These goals dovetail with the main aim of the Paris Agreement (often referred to as an internationally-adopted treaty on climate change), which is to keep the average global temperature rise this century below 2 Celsius, and to spearhead efforts to limit this temperature increase.

-Anyone with half-an-instinct for business will tell you that the world (and the world’s companies) are generally moving toward ‘greener’ products + services. Yet, had progress not been made at COP26, that move could have been considerably slowed down. So, general consensus is that this continues momentum in the markets for ecologically-friendly companies, such as low-emissions industrial and electric vehicles.

-And with this movement being advanced, whole classes of investors will re-assess green energy and clean tech opportunities – as well as the adaptability of traditional fossil-fuel giants, which could certainly shape portfolios moving forward.

-After President Trump withdrew the U.S. from the Paris Agreement, President Biden rejoined us, and has committed the United States to “net zero” (a complete offset of carbon emissions) by 2050.

-COP26 developments could be a boon for nuclear energy. As the deadlines loom for climate action, global leaders are realizing that this once-taboo technology may be one of the last best hopes. In the United States, both nuclear and hydrogen technologies tend to get bipartisan backing. Plus, the U.S. Nuclear Regulatory Commission recently approved the design of a new kind of reactor, known as a small modular reactor. So, this sector could heat up (pun half-intended) tremendously in coming years.

-Despite the sea change toward greener energy sources, we should expect to see continued support for oil, gas and coal companies. While China and India pushed back against stricter coal rules, the bigger group reluctantly agreed to push a yes-vote overall – which calls for counties to “accelerate efforts towards the phase down of unabated coal power and inefficient fossil fuel subsidies.” The same text mentions that nations will recognize “the need for support towards a just transition”. Which means that you might not want to sell your big oil, petroleum and natural gas stocks just yet – as they now have a longer runway for pivot.

-Banks, insurers and investors with $130 trillion at their disposal pledged to put combating climate change at the center of their support, by helping green investments find firmer footing. In addition, the United States said it would support a mechanism to raise new finance for clean energy and sustainable infrastructure in emerging markets.

How Signet Can Help:

What’s our main takeaway from this article? That trend-driven and hotly-contested ideas or strategies should always be talked over with a qualified investment professional – one who specializes in impact investing, as well as a wide range of investment specialties. To begin developing and implementing your impact investing strategy, contact us today.

At Signet, it’s our mission to provide investment resources and strategies to clients and financial institutions, helping them develop a greater knowledge and passion for sustainable, responsible and impact investments.

Let us help you find your mark with our experience.

The return may be lower than if the adviser made decisions based solely on investment considerations. All investing involves risk, including loss of principal. No strategy assures success, or protects against loss. There is no guarantee that a diversified portfolio will enhance overall returns or outperform a non-diversified portfolio. Diversification does not protect against market risk.)