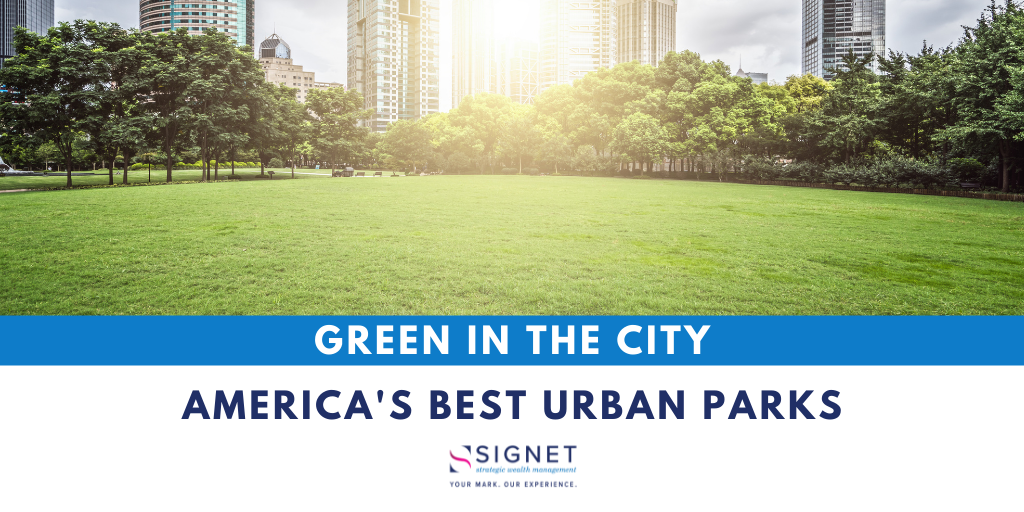 From the Belvedere Castle in Central Park to the herds of roaming buffalo in Golden Gate Park, the US has no shortage of beautiful green spaces in its cities.

You might not think of America’s urban centers as places to explore hundreds of acres of wilderness, but if you’re looking for a natural getaway without leaving the hustle and bustle of the city, these are the places to visit.

Savannah, GA, is known for its storybook natural beauty, thanks to the traditional Spanish Moss trees that dot the city’s streets. At the center of the town’s historic district is Forsyth Park, built in 1851. Famous for its incredible fountain that’s reminiscent of those you might find in Europe, it’s an absolute must on your trip through this southern city.

At the heart of Philadelphia, PA, is this 9,200-acre park that is steeped in history. At the front of the park is the Philadelphia Museum of Art, which is an incredible sight in itself. However, if you’re looking to get outdoors, the park also offers plenty of opportunities for hiking, biking, horseback riding, and more. Don’t forget to stop along the Delaware River, too, to catch a glimpse of the historic boathouses on the city’s famous Kelly Drive.

Along the banks of the Ohio River in downtown Cincinnati lies Smale Riverfront Park, which has been a main gathering center for the city since 2008. A relatively new park, it hosts a series of swings that overlook the river, numerous walking and running trails, and the Gardner Family Grove and Rose Garden, with rose bushes and a variety of trees that stretch for more than an acre.

It’s not every day you can visit a city and see a herd of buffalo grazing on a hill, but in San Francisco, Golden Gate Park is home to a spectacular group of American Bison that were introduced to the area in the 1800s. Aside from the bison, a trip to the Japanese Tea House and Garden or the Golden Gate Park Aquarium make this a great addition to your bucket list.

Though Central Park is New York’s most famous, Prospect Park in Brooklyn is not to be overlooked. At more than 500 acres, the park houses an extensive trail system, a zoo, an ice skating rink, multiple baseball and other athletic fields, and even freshwater fishing. If you need to escape the craziness of Times Square, this park is the perfect spot.